The operation cost a fortune, she was synthetic where she shouldn’t be, and, at the end of it, a lot of the original crap was still intact. I finally understood what the mechanic meant when he told us that Sylvia’s new high-tech lightweight fiberglass underbelly would seem bionic.

For the most part, Margie was a practical investor. But the strict ROI assessment that she applied to everything from stocks, to cars to children did not apply to Sylvia. Since we had picked her up, the Airstream trailer had undergone three sets of repairs, halved our MPG, and – because her temperamental refrigerator was constantly freezing or melting out food – tripled our food budget. The only good part about traveling with Sylvia was that, from a distance, she looked really cute.

From a cost/benefit standpoint, we were behind the moment Margie spent 99 cents on new washer for her hose. But Margie was either too stubborn or too loyal to cut her losses and move on. She paid the four-figured bill and, with Sylvia once again in tow, we were back on the road. 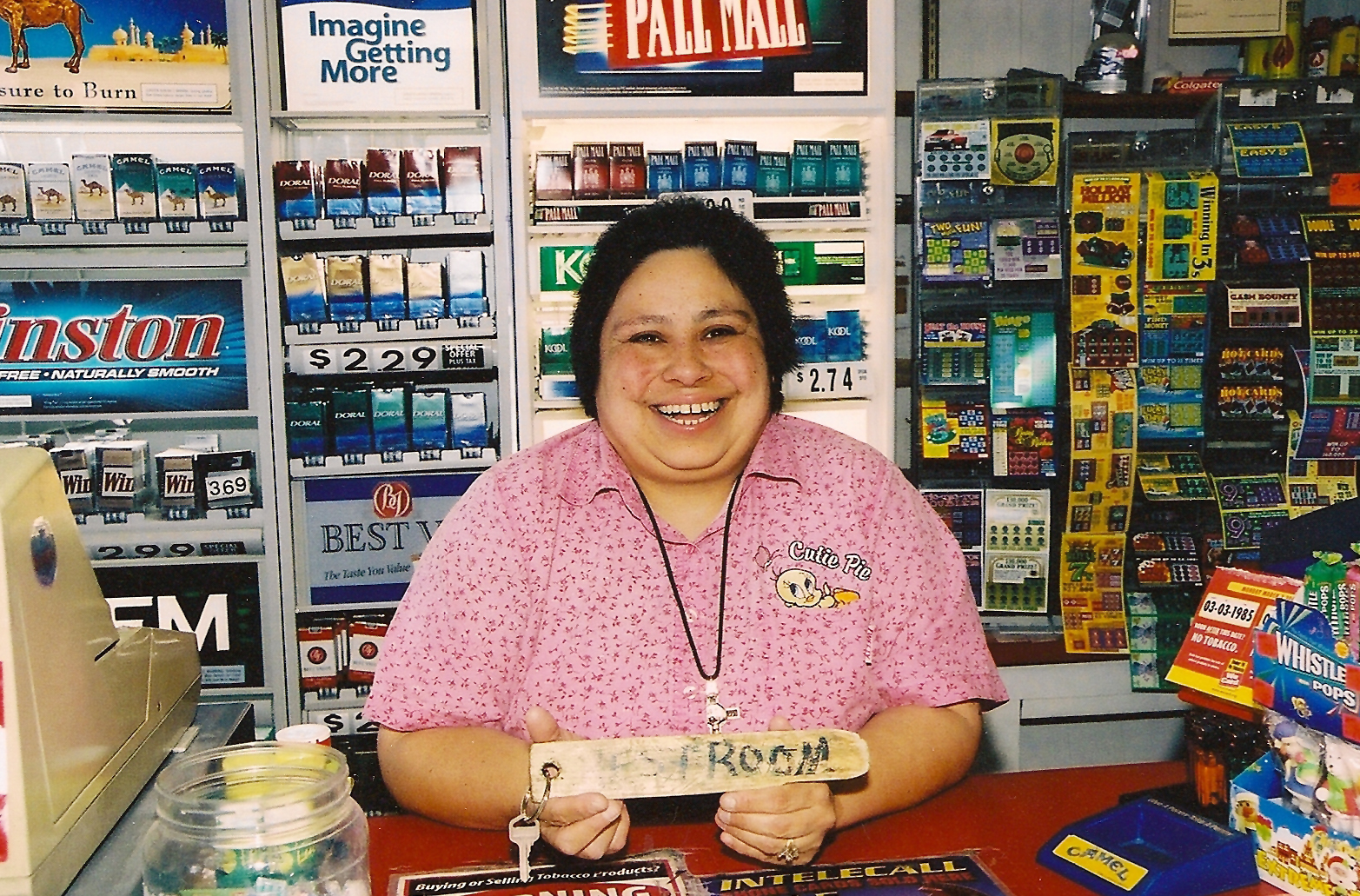 The nature of our trip led to very limited interactions with people around the country. We spent our days running into gas stations, asking people if they locked their bathrooms, and running out. When we did pause for conversations, they were often brief and centered around awkward pauses. If the dialogue progressed beyond “you’re doing what?” and into the land of “tell me about it,” Margie was more than happy to stop and swap life stories. Our schedule didn’t allow for lunch breaks. But, the minute someone showed the mildest interest in an exchange, all timetables were thrown out the window.

We discovered Leon and Martha via recommendation. “Under the stone bridge, to the left of the mill and beyond the Pepsi factory” we found their company, the C & M Oil Company. They didn’t have a restroom keychain that we could photograph for our project. They didn’t need a lock. They had no customers; they didn’t even need a door. But Leon, and his wife, Martha, both well over sixty five, still showed up for work wearing immaculate jeans and khakis with golf shirts that seemed better suited for a shuffle board game than a day at a gas station.

Maybe, they were the politest people in the country. Maybe quiet days without the bother of pesky patrons made them crave human interaction. Or, maybe, Leon and Martha just understood what it meant to search for something that was vanishing – the corporate quick-mart gas stations and their sleek interior bathrooms, that didn’t need keys, were making locally owned stations and their clunky keychains obsolete. Whatever it was, the two sharply dressed refugees from the lido deck took an honest interest in our project and gave us a full tour of their business.

Leon spoke exclusively in past tense. “This is where the train used to stop to pick up oil…We once used this area for storage… My nephew was the voice of Charlie on the television show Charlie’s Angeles.” Our responses to his questions fell into future tense, “We are going to put a book together of photographs of restroom keychains…We plan to drive through Texas…I hope to have roast beef for dinner.”

It felt disingenuous when we wished each other “good luck” as we departed. Chance or fate wasn’t what any of us needed. But, I didn’t want to say “I hope you find what you lost,” any more than I wanted to hear, “I hope you find what you’re looking for.” We took the polite route, shook hands, walked away, and both thought to ourselves, “Man that person is screwed.”

I had finally figured out the secret to navigating with Margie. I didn’t tell her what the final destination was, I gave her information on a turn-by-turn basis and acted surprised when we arrived. That was how I got us to the top shelf of Florida. If it had been up to Margie, we would have turned onto the interstate, and headed east, back in Georgia. As it was, we were outside Tallahassee, looking for a campground.

The landscape was lush, beautiful and I felt validated when we pulled into a park and the saw the “duckling crossing” signs. I had taken us to a place that was green, abundant, and full of cute creatures. Sealed inside the car, I was confident that I was the best route-finder ever. It wasn’t until I opened the door, I that I realized the flaw in my navigation.

If there were once any sort of baby animals in the vicinity, the mosquitoes would have killed them immediately – which, could have accounted for the smell that was wafting from the nearby forest. For the first time in out travels, it was warm enough to sleep with the windows open. But, as the stench and bugs forced us to seal all vents and windows, we would never able to appreciate it. I, with my clever plotting, had led us into a swamp nightmare that could only be escaped by hermetically sealing ourselves in a cabin and hoping that in morning some sort of breeze would come along to clear the air.