The sound of the rain pinging off the trailer was comforting. It wasn’t cozy or charming or poetic. I was sealed in a 19ft. cylinder in the middle of a muddy lot. For all intents and purposes, I should have been curled up in a ball mumbling to myself. But I was happy and relaxed, because – for the first time since we left Los Angeles – it was warm enough to rain. There was no snow to shovel and no ice to scrape off windows. My camera wouldn’t freeze to my hands and I could possibly take off the long underwear I had been wearing since Utah. That, all by itself, made it a good day. Margie was also sporting a pair of thermals that needed to be retired, so I assumed she would share in my delight. But, she only saw the dark side of water mixing with earth. “It’s going to be a muddy walk to the bathroom.” With that, reality set back in. The first time I met Sylvia, Margie gave me a tour of her bathroom that included a shower stall that had been converted into a closet and a toilet that had one rule attached to it, “you use it, you empty it.” It was still early enough in the trip that I found the prospect of emptying a storage tank filled with blackwater disgusting. Life on the road would eventually destroy my apprehension. But, at that moment, sprinting the length of two football fields to use the park’s muddy bathroom seemed like the most appealing option.

I waited in line behind 15 people to use a toilet and the seat was still frozen when I used it. The garbage that we left out the night before was gone – in its place stood twenty mythically large gulls. The electricity that could barely run a cassette player, mysteriously found the strength to over-power the refrigerator and freeze all our food. Living in a trailer was magical in ways that I’d never anticipated.

Not only was I being treated to a style of living that I had never encountered, but I was also about to experience a whole new region of the country I hadn’t visited. My limited expectations for the southern states came from postcards and movies. As such, I was sure that the next phase of our trip would be filled with alligators and sassy black women who, despite their hatred and mistrust, would teach me life lessons. When we passed through The Great Dismal Swamp moving as fast as two women towing a literal ton of weight could travel, I realized that, unless either of those characters was sunning themselves in the middle of the road or protecting a locked bathroom, I wasn’t going to see either. I was going to be the first person to cross the United States without one cliché to show for it. 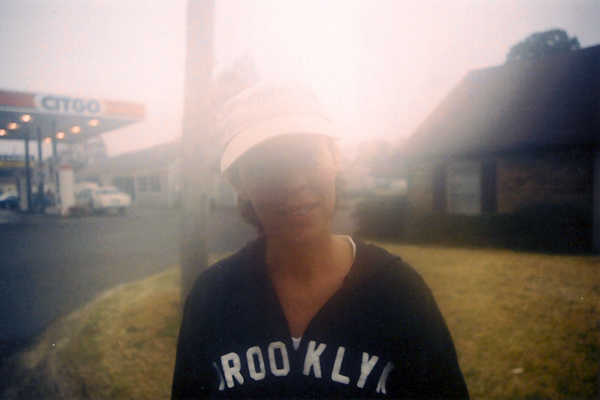 The further south we went, the warmer and more humid the air became. Along the Albemarle Sound, we encountered our first station and key chain. Evidently, the shock of rapidly moving from near freezing rain to a climate that felt like the inside of a mouth, was too much for my equipment to handle. Every piece of glass and mirror in my camera was fogged. Wiping it dry was a Sisyphean task; with each rub, more condensation accumulated. I panicked and immediately broke the first rule of outdoor photography – do not expose the interior components of the camera to the finger grease and dust found on location shoots. Sitting in a gravel parking lot with no less than three digits stuffed into the belly of my camera was, by no means, an ideal situation. That promptly led me to break the second rule – don’t let anyone know how badly you are fucking up. While Margie scanned the wet, clouded camera pieces on the tailgate of the car, I had a brief opportunity to calmly pretend I was performing routine maintenance. Instead I just mumbled, “Oh my God, Oh my God, Oh my God.” and repeatedly touched the lenses.

It was going to be hard to claim that I was a photographer if my equipment was destroyed. Even during my darkest struggles with creative block, I always knew that, if the ideas came, my camera was ready. And there I was in North Carolina, staring at the dismembered corpse of my camera, freaking out that I was going to miss the opportunity to photograph a toilet. I had hit a point where I had nothing else to lose. I reattached the lens to the body, and started to take pictures. When we processed the film in Los Angeles, we would find out if scratches or dust had ruined the film – until then, I just had to keep shooting.

On the road, people and objects took on a different significance then they did at home. Abandoned houses looked historic. Beef jerky seemed healthy. And an androgynous proprietor of a bait & eel shop was someone I very much wanted to have a drink with. Juanita looked like my high school Spanish teacher and smelled like fish, in my mind, that made her a lesbian. When we asked her for a key to the bathroom and told her about our quest; she gave a big hearty laugh, swiveled her hips to reveal a chain of keys attached to her belt and bellowed, “your looking at it.” She was a human keychain. We were looking for keychains. By all stereotypical indicators, she was a lesbian. We were lesbians. Her shirt had a chest patch with her name embroidered on it. We thought that was ironic. Margie and I had found our tribe. I imagined that we would have drinks together and discuss football or swap coming out stories. She could tell us how to navigate the homophobia in small southern towns. Maybe she would even share her favorite gay-friendly BBQ joint or give us directions to a local lesbian bar. Mentally, I had completely planned how the rest of the day would pan out.

When Juanita handed us her card, Margie and I both grabbed at it like she was handing us a final clue to the puzzle we were racing to solve. Surely, the southern eel peddler would have some sort of wink to her sexual orientation on her business promotions. A pink triangle, a rainbow flag, a softball mitt – we were looking for anything.  Instead, embossed next to a crab wearing sunglasses, was the quote, “Jesus Saves.” Juanita had managed to make a smiling crustacean with eye protection the least troubling aspect of her business card. Our plan switched from an afternoon comparing sensible shoes to driving straight to the Wilmington KOA, where we were going to spend the night.