At some point during our pre-trip planning, I wished Margie had mentioned that Sylvia, the trailer we were going to be living in, didn’t have a functioning shower. Somewhere between “I think this is your opportunity to learn how to wear pajamas” and “do you really have the skill-set to photograph keychains?” she could have slipped in a little “for twenty days we’re going to use the public showers in rural campgrounds; you might want to bring something to protect your skin.”

As result of her omission, we were headed to the washroom in two very different states of preparation. Margie had a bathrobe, shower shoes and soap-on-a-rope. I had a towel wrapped around my torso and sandwich bags secured to my ankles. Her protective footwear had traction and allowed easy access for cleaning, mine slipped like bowling shoes and filled with water until my feet looked ghoulish carnival prizes.

In reality, it was too late in the game to start worrying about viruses. A festering case of athlete’s foot would just have been the icing on the germ-infested cake. Weeks of handling bathroom paraphernalia had taken its toll. We were both sick. Under normal circumstances, that would have translated into chicken soup and bed rest. On the road, it meant 30,000 mgs of sugar infused vitamin C tablets and a late start.

Sunday leisure drivers had exceptionally tolerant attitudes about sharing the road. We made frequent stops and switched lanes like squirrels, but, because we did it in a vintage trailer strapped to our ass; people cruised by with their thumbs in the air. Come Monday morning we would get a different finger, but for the time being, Margie relished the gestures. She took every wave, every smile, as validation that people really liked Sylvia. They really did like her. And, by extension, they liked us. And, that felt good.

Margie was in the middle of schooling me about the special place in America’s heart where Airstream Trailers reside, when the bottom dropped out of her story…literally. A loud boom interrupted her ode to her possession. We immediately pulled over onto a grassy shoulder of road. The suddenness and intensity of the sound made us think that its source was a gas explosion. But, after inspection, both the propane tanks and connecting lines were intact. Next, we checked the tires looking for a blowout. That was where we discovered the problem. A sheet of metal from Sylvia’s underbelly had partially dislodged and wrapped itself around a tire. The sound appeared to have been caused by a combination of the metal scraping along the ground while being sheared from its foundation. The tire was undamaged, but in order to move, we would have to tear the remaining part still connected to Sylvia.

First, we called AAA and asked them to send someone with shears, or a torch, to free the wheel. They politely declined. They would be happy to come and drag Sylvia and her metal-covered wheel to a garage of our choice. When we explained that moving the tire without cutting the metal would cause severe and irreparable damage, they were fine with that. For the second time on our trip, AAA refused to come to our service.

Next, Margie called the garage in New York that charged her nearly $3000 to make Sylvia “road-worthy.” When we left them, they declared that their repairs had made the trailer “in the range” of a functioning vehicle. Finally we understood what that meant. It was about 60%. That was the amount of metal still attached to the foundation. How often the brakes, refrigerator, and lights worked. And, the percentage of Margie’s story they listened to before telling her to call AAA.

Margie and I sat in the car and ran through our list of options. The most logical of which was to unhitch the trailer, drive to a hardware store, and purchase something to cut the metal. The problem was, we didn’t know which way to drive. We didn’t know if it would be safe if we left Sylvia. We didn’t know if it was safe if someone stayed with Sylvia. Discussing the risk vs. reward of our plan was so engrossing that we didn’t notice that a dented white pick-up truck had pulled out of a dirt road in the woods and blocked our car. Two characters from Deliverance were standing outside our window.

My instincts told me to lock my door, but I didn’t because I thought it could be construed as rude. In a situation where it seemed highly likely that I was going to be kidnapped and murdered, I became possessed with an overwhelming sense of etiquette. Margie rolled down her window, “Hello sir, how may I help you?” Apparently, we were products of the same finishing school. 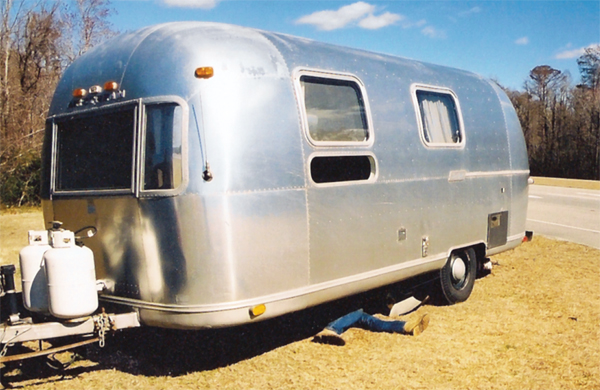 Thankfully, the men did not possess my capacity for prejudice. They didn’t see two women sitting on the roadside and assume that they were lesbians on a quest for self-worth via chronicling dirty relics of Americana. They saw two people that were worthy of help. Right away they pulled out a toolbox and began cutting the tire free. A man who looked like he weighed less than a German Shepard crawled under the trailer and chaotically hammered the foundation until he extracted a 9ft square sheet of metal. When he finished, his partner hurled the scrap into their truck. Then they returned a wandering dog to his home across the street and left as quickly as they had come. Their behavior was so bizarrely generous, I felt like I was on candid camera.

Sylvia was once again mobile. The problem was that she had nothing protecting her underside. We decided the best thing to do was get close to Savannah and find a repair shop in the morning. We arrived at the campground at 4:30. By 5:30, we were both asleep.