For all of our differences, Margie and I had both failed to understand exactly what we needed to wear while traveling across the country’s northern regions in the winter. Our suitcases were filled with cotton, linen, and light denim. We packed like we were going to spend thirty days cocktailing in Palm Springs and found ourselves knee deep in Wyoming snow. When we woke up in the house Beth lent to us, there was a realization that sweatshirts weren’t sustainable coverage in freezing weather. After a night of eating her food and sleeping in her beds, we searched the house for jackets, fleece shirts, hats, and mittens with mob rule decorum. Four days on the road and we had picked up the manners of an entitled character in a Grimm fairy tale combined with the subtlety of a plague of locusts. Margie and I tried to temper our theft with a note promising beer and eternal gratitude, but I couldn’t help feeling that we were becoming the type of guests that caused people to shutter their houses and pray that we would land in the next town.

By 11:30, we were traveling through the Grand Teton National Park. Margie was in her element. She waxed poetic about the grandeur of the snow covering the mountains, the boldness of the large snow banks bordering the roads, and the symphony of the ice crunching beneath the car’s tires. Viewing a national treasure while traveling at autobahn level speeds made her very happy. Needless to say, I was terrified. Margie saw a winter wonderland, for me, it was more like an ice rink bordered by rolling drifts of cold powdery snow capable of swallowing a large SUV, a traveling photo studio, and two women until the first major thaw. I tried to warn Margie that I thought the roads were dangerous. But, my words didn’t fall on deaf ears; they fell on ears that were sick of me complaining. She did not slow down. She accelerated.

At the onset of the skid, my screams and pleas for God’s mercy quickly alerted Margie that it was time to pay attention. Without help or permission, the car slid into an uncontrollable spin across the Wyoming marker of the Continental Divide. Snow bank, guardrail, snow bank, guardrail, we bounced from one side of the road to the other.  Margie was moving her hands from the steering wheel, to the four-wheel drive shift, to the radio dials, and back again as if she was touching a series of hot skillets.  Eventually, somewhere around the third rotation, I stopped screaming and she stopped her rapid lever adjustment. There was nothing to do but wait for the moment of impact, or the drop off the cliff, whichever came first.  Margie turned to me and said, “Don’t worry, we’ll be alright.”  There was something oddly soothing about being told to calm down while trapped in a car as it pirouetted down a curved mountain road.  I wanted to believe her, but I couldn’t get past the white landscape whirling outside the window. Finally, we hit a snow bank at such an angle that, with one last giant thrash, the car stopped. Like little marionettes in the final throes of a dance, our limbs lifted upwards, jiggled in the air, and joined our bodies that remained strapped firmly in the seats.

It was ominously quiet.  Physically we weren’t hurt, but the car was a mess. The centrifugal force of the spin and impact caused everything, not contained by a seatbelt, to migrate towards the windows. Only the center of the car was completely clean.  What were once clearly delineated areas for clothing, food, and equipment were erased in a matter of seconds. The entire contents of my sunflower seed spit cup covered the front cabin. I watched as Margie slowly picked wet, empty shells from her lap and steering wheel and two thoughts raced through my mind: thank God, I wasn’t driving and, finally, the car was how I would have packed it.

In the past, a pair of unfolded socks was nearly a deathblow for Margie.  We were sitting in a car that looked like the inside of my storage closet.  I prepared myself for a complete freak out.  Instead, her first words were concern for my well-being and then she apologized for almost killing me. I was sincerely touched that she cared about my health, but in terms of death, it was way too early be throwing around the word “almost.”

During the spin, Margie had tried to slow the velocity of the rotations by putting the car in four-wheel drive, four-wheel drive low, two-wheel drive and neutral. She gave each position 1/16 of a second to work its magic before moving on to the next gear.  The process had jammed the drive train somewhere in the no-mans-land of three-wheel drive.  The car wouldn’t start.  We tried to call AAA for help, but neither of our cell phones had reception.  My gut feeling that this trip would end with someone’s passing was looking less like an irrational fear and more eerily like an accurate prophecy. We would escape a quick knock off by oncoming cars, cliffs and trees, just to slowly freeze to death on the side of the road. As I saw it, the best case-scenario was that we would lose only a few appendages to frost bite.

It was as perfect a time as any for Margie to start cleaning. As God as her witness, the search crews would find our frozen bodies beside a neatly packed car.  Never in my life had I seen a more bizarre nervous tick. She just crawled around the back seat folding clothes, picking up sunflower seeds, and repeating her apologies. She organized and I stood in the snow watching her. There was no discussion about what we could do — whether we should wave down one of the cars that periodically passed us, or start walking and hope that we found a gas station — Margie just cleaned and I was immobile. We were both useless.

Finally, I decided to look under the hood and see if I could find the problem.  It appeared to be a perfectly good engine – impressively, and expectedly, dirt free. I touched a few wires, squeezed a few caps, and was reminded of the first lesson of auto mechanics – even in cold weather, an engine generates an extraordinary amount of heat. I climbed back into the car to look for a salve for my burns.  Margie saw the three blisters bubbling on the tips of each of my central fingers and smiled, “You’re probably going to have scars.” We both found that hysterical.

I picked up a sunflower shell, “these will be rattling around your vents for years.” We doubled over in laughter.

Margie motioned towards the jammed gearshift, “It doesn’t matter, we’re probably going to die here.” That was the funniest thing either of us had heard all year. We laughed until we had exhausted ourselves. Finally, still giggling, Margie put the key back in the engine and said, “Let’s try this one more time.” She grabbed the four-wheel drive lever with all her strength and slammed it into gear. The car jumped, rolled forward, and started.

We decided to stop at the next garage and make sure that there was no major damage to the engine. That was our plan until we actually arrived in Dubois, Wyoming – a model replica of an old “authentic” western town. Harkening back to the days of simpler times, the community celebrated the days before economic development and civilization had ruined the Wild West. The theme would have been more effective if there were some actual tourists and/or locals to inhabit the taverns and stores that comprised the main street. Instead, what could have been cute and nostalgic was doomed to be ironic and creepy. 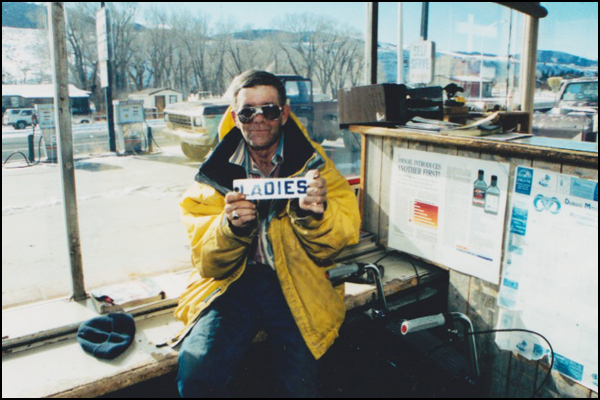 We decided to stop with the hope that someone at the hitching post knew something about cars. A one-eyed mechanic with a walker looked at the car and agreed to help us if Margie and I changed into our bikinis. While we had to admire a man who would forgo paying customers for an opportunity to watch two strangers squirm, we weren’t wholly comfortable doing business with him, but there didn’t seem to be a lot of options. On the one hand, we had a disturbing local in a scary gimmick town; on the other, an open road with a car that may-or-may-not be mechanically faulty. I had seen plenty of movies that could make the case against either decision. Sometimes staying put can be just as unnerving as moving forward; in a matter of minutes, we were back on the road. 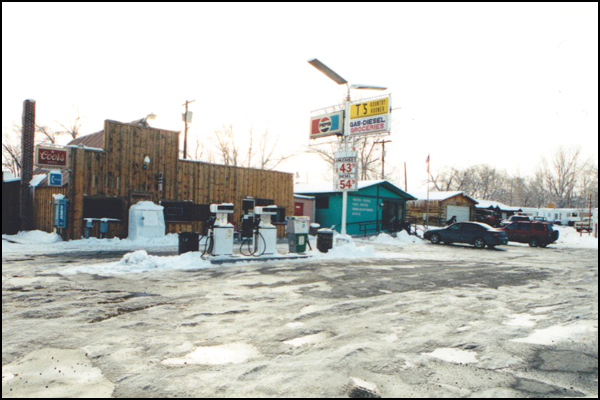 Margie and I did not have the right constitution for Wyoming. I suspected that, even before we crossed through the area called Hell’s Half Acre, we were soft, in every sense of the word; and that the locals were not.  When a gas attendant explained that the stick being used for a keychain was “so’s you can protect yourself if someone comes near your stall,” Margie and I giggled nervously like little schoolgirls hoping the attendant was making a joke. We entered Casper next, the town that spawned Dick Cheney, and I knew things weren’t going to improve. Our first interaction with the locals was watching a man get hit by a car while crossing the street. He rolled off the hood, hit the cement, picked up his bag, and continued on his way. The car didn’t stop and he didn’t look back. Margie and I were the most traumatized victims at the scene. We found a motel and for once the dirty brown décor and musty cigarette smell of our room seemed inviting. We consumed cubes of cheese and drank skunked wine while trying to keep as little flesh as possible from touching the stained motel sheets.  We were just happy to be safe from accidents, stick wielding bathroom patrons, and relatives of the vice-president.