“Paradise in Nebraska,” was how the sign on the door described the combination indoor pool and workout area of the hotel.  “Executive gym,” read the marquee along the road.  “A set of five pound weights and two treadmills in the corner of an uncomfortably humid pool area,” was what I found. It was the perfect environment to grow mold and bacteria, and I was fine with that. I didn’t care that the room smelled like hot dirty socks. It was insignificant that the treadmill generated a sound equal – in pitch and appeal – to the cry of a wounded possum. After sitting in a car with Margie for a week straight, surviving on cheese and sunflower seeds, all that mattered was that I was alone and moving my limbs. I could have been stuffed in a hamster ball and rolled through Death Valley and I would have been happy.

The day was overcast, the weather hung in that no-man’s-land between snow and rain. Many of the local gas stations with outdoor restroom were closed on Sunday. We were covering a lot of territory without stopping. Our drive was long and gloomy and neither of us wanted to talk.  There was complete silence in the car.  Until, finally, Margie broke it; “I have regrets.”

“Wait ‘til you see the photos.  I am sure they will be better than you think.” 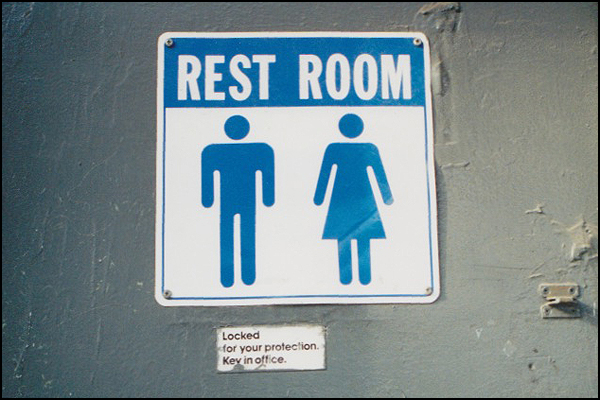 I was in the middle of Nebraska, banking that a portfolio full of restroom keychains was going to be a game changer.  Either I had incredibly low expectations or remorse was a daily occurrence in my life.  But, I had to assume that Margie wasn’t ready for a full catalog of my laments, so I kept it simple.  “My grandmother asked me to write her a letter.  Every time I saw her, she would ask me to write her a letter.  I never did.  She died two years ago.”

Margie didn’t respond.  There wasn’t a lot to say about laziness and elder neglect.

I made a small attempt to comfort her, “That’s the stupidest thing I ever heard.”

“Now I regret telling you my regret.”

We were back to silence.

It was dark when we crossed the Illinois border.  I wanted to stop as soon as the sun set.  Margie wanted to keep moving until we ran out of road. It was Sunday night; I yearned for a warm dinner on a comfortable couch in front of the T.V.  But with every mile that we traveled in the darkness, I tried to come to terms with what I was going to get and lowered the bar for what would make me happy. We came to a four-way intersection in the middle of miles of open fields. On one corner was a strip club. Cattycorner to the club was a cinder block motel with hourly rates and cable.  I begged Margie to stop because it seemed “homey enough.” She just kept driving.

That was it.  I had reached my breaking point. I started to scream, “All I wanted was to have a pasta dinner and watch Alias.  This trip was about seeing the country.  And with my night blindness, I can’t see a thing.”  Even with her “sub-standard education,” Margie realized that I was full of crap.  I could see perfectly well, I was just too lazy to strain my eyes.  Regardless, Margie agreed to stop.  The problem was, we were in rural Illinois and had passed what appeared to be the only motel in the state. She just kept driving.

It was another hour before we came to Plainville, Il.  There was no place to stay, but it did have a nice Italian restaurant with a television.  Our waitress gave us directions to the next town, Joliet.  As far as cheap characterless places to sleep went, we hit the jackpot – three of them, all in a row.  Looking for the best deal, Margie insisted that we stop at every one and compare rates.  Our first stop was the cheapest.  We circled back and checked in.

Unlike the other nights where we parked our car outside our room, we were on the fifth floor.  We carried all of our bags, food, and equipment through the lobby, up the elevator and down the hall to our room.  We were exhausted, but content. Everyday on the road, we craved some semblance of routine from our ordinary lives. In the mornings I wanted some decent coffee. I got a couple of sips from a complimentary cup that came with a tank of gas. Margie wanted a clean car. She got a full wax special from a self-serve hidden in a small Iowa neighborhood. My moment of happiness usually ended when my coffee spilled as I picked up my camera to photograph the gas station’s god forsaken outdoor restroom.  Margie’s joy lasted until we got back on the road and dirty wet snow once again covered the car. But at night it was different. No matter how bad the motels were, we had our own pillows and blankets – and that gave us comfort.

Everything seemed good. I should have known that something was about to go wrong.

I unpacked my bedding and Margie began to unpack hers.  When she pulled out her down pillow, it bounced out of the bag and into its original shape.  It was an uncharacteristic behavior for a feather filled substance – more typical of a synthetic, polyester, cheap motel pillow.  Just like the pillows where we stayed last night.  Margie grabbed it and shook it in front of my face.  It even smelled like it had lived it’s entire life in a motel.  She was trembling and screaming.  “Tell me it’s a joke.  Tell me it’s a joke.”

I wish I were that funny. After I had returned from my morning workout, Margie was already in the shower. I lied on the bed and watched The Today Show until I heard the shower turn off. At that point, I quickly stuffed all our bedding into duffel bags. Two blankets and two pillows filled two bags. In my haste to do the least amount of work for the largest return, I had packed the wrong pillow.

Now I had a new regret.

In my defense, she should have never brought a pillow with a white pillowcase to a motel. All the pillows looked the same except for my red flannel one. I don’t point that out; instead I offered to make it right, “Is there anything Lisa can do.”

I honestly didn’t know what to do. If I gave her my pillow, neither of us would have been happy. I couldn’t point out that some lonely businessman in Nebraska was probably having a very restful night sleep, thanks to me. Instead, I went straight to bed.  When we turned out the lights I tossed and turned trying to get comfortable. Eventually, Margie heard and acknowledged my unease, “If I hear you fluff your pillow one more time, I am going to suffocate you with it.”