I was standing knee deep in snow while wearing ankle high shoes. The nub of an antenna rising out of the crest was the only indication that our car was buried under the most substantial snowdrift. “We have a lot of work to do.” Margie and I said the exact same thing at the exact same time. I meant it like I was looking at a minimum of an hour of back-breaking excavation after which my reward would be access to the front seat of something that I was thoroughly sick of. Tears and a deep slow work song were all I could muster. Margie on the other hand, was in a complete state of euphoria. She shoveled snow like she was making a workout video. The only time she paused was to clap her hands with excitement and shout, “Let’s keep it goin’!”

Arduous labor? or invigorating eye-opener? Whatever you wanted to call it, as soon as we finished we should have hit the road before the storm got worse. But I needed the morning to walk down the Memory Lane of my college years and drop off my hangover at You Can’t Go Back Street. We went to a local diner that was famous for its themed sugar cookies and the ability to fit a half-pound of cheese in a single cup of chili. That was where I decided to order something from the “light start” side of the menu. I should have known better. The chef cooked Margie’s Velveta bacon omelet to perfection and then used my muffin to clean the skillet. My vegetarian breakfast was greasy, and had all the cholesterol of the carnivore’s delight. It was the perfect hangover food.

After breakfast we strolled through town where I bought Lisa a Valentine’s card and Denison t-shirt. Next I suggested we go to the field house and look at my soccer portrait from freshmen year. Margie stomached the food, tolerated the shopping, but standing in the corridor of a musty college gym while I pointed at a blurred head at the back of a team portrait and proudly declared, “I think that’s me!” was her breaking point. Five minutes later we were back on the road.

It was almost noon and I smelled like Jagermeister and bacon fat. I was in no position to make demands and Margie knew it. There was nothing I could do but sit quietly as she bolted down Main St, ran two stop signs, and announced, “Next stop, New York!” Not since my dad had dropped me off freshman year, had I seen an adult race out of Granville with such urgency.

We started on small country roads where the barren winter landscape and rural towns passed like flashes from a nuclear winter. The trees and vegetation that gave the fields life in spring, summer, and fall, were gone. The fields looked cold and menacing like decaying factories. It didn’t seem like the best climate for outdoor restrooms. The minute your body acclimated to the warmth and the ungodly humidity of the interiors, you were sent outside to relive yourself. Still, a surprising number of people were willing to trudge across an icy cold parking lot to use the toilets. Unfortunately when it came to following that trip with sitting on an icy seat, half the population dropped off. At two of the four stops we made, the restrooms were covered in human excrement. 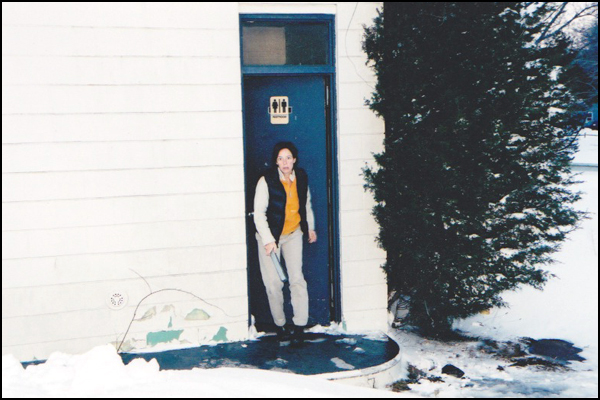 Considering Margie’s low tolerance for the wet sunflower shells that came out of my mouth, she adapted well to something that came out of a stranger’s ass. I commented on her remarkable grace when she got really upset,  “you mean a person did that?”

Yes. I found it completely unlikely that some sort of animal, secured a key, walked across a freezing parking lot, opened a door, and took the biggest crap of its life in not just one but two bathrooms where we had stopped to take pictures. So, I had to assume humans made the mess. With that revelation, our time in Ohio was officially over. We were on the expressway out.

Margie directed me to the interstate, where the road was fast and slick – much too slick. Snow and ice were beginning to cover the pavement. The cars moved in a tight pack that held the same respect for safety and individuality as a stampede of lemmings. Yielding and braking were completely out of the question. Everyone accelerated, decelerated, and turned as one unit. The people we had met that day weren’t especially nice, but, sheltered by the anonymity of a car they become downright terrifying. Loud horns, lewd gestures, and quick cut-offs confirmed that our presence was unwanted.

I wanted to pull over and Margie was mapping a hasty course to New York. The clarity of our positions made conversation pointless. The only sound in the car were my occasional whimpers as I moved side to side in my lane in an effort to avoid the trucks that were crossing into my space. Finally we passed a second jack-knifed truck and Margie finally acknowledged traveling 70 mph on dark frozen roads while surrounded between four semis wasn’t an ideal travel condition. She agreed to pull over for the night.

As soon as Margie spoke the words, the sky cleared and for the first time in over an hour I was able to spot the exit. Without hesitation I raced down the ramp and pulled into the brightly lit lot of the Comfort Inn. I parked under a sign advertising comfortable beds and cable TV. It was everything I wanted at that moment. Warm air steamed the inside of the windows, families hugged each other in the foyer, and a restaurant was conveniently located on site, next to the lobby. Margie ran inside to check in and was back in the car before I could unbuckle my seatbelt. She was enraged by the Comfort Inn’s audaciously high rates ($75/night). The warm yellow lights, the loving families, the inviting eatery all faded from the rearview mirror as we drove away. Margie pointed into the darkness; “there is another place down the road next to the highway.” 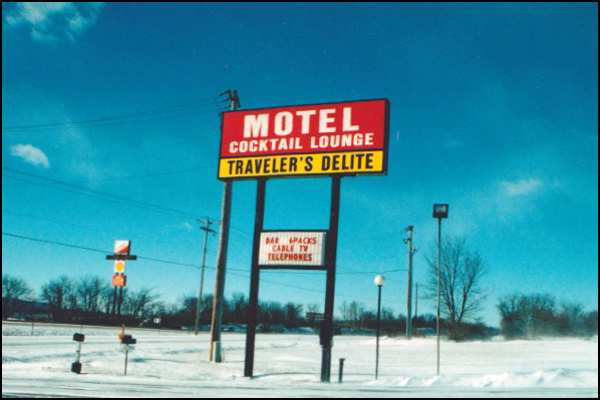 We broke fresh snow pulling into the parking lot of the Traveler’s Delite, motel and cocktail lounge.  In place of a marquee advertising comfort and entertainment, we found one promising six packs and telephone service. Instead of a restaurant, there was a lounge that proudly served alcohol to go. Our room was located around the back of the building where we had an unobstructed view of deserted woods. We tried, but because of safety issues, Domino’s pizza wouldn’t deliver to the motel. I was scared and anxious but I took solace in the fact that it was our last night in a motel.  Tomorrow we would pick up Sylvia, Margie’s Airstream trailer. From that point on, all our scary and uncomfortable nights wouldn’t cost us a dime.