To pay bills and keep Lisa from selling my photography equipment, I entered the land of “anything for a buck.” Need a house sitter? Ordered a new dining room set and need someone to wait at your house for the six-hour delivery window? Got caught speeding and too busy to take online driving school? I was your gal.

I quickly became the favorite hire of Mimi, a casting director who traveled, shopped and drove like there was no such thing as consequences. She referred to me as her personal assistant. I thought our relationship had more of a pimp/ho dynamic. But, her title made her sound important and gave her license to treat me like a peasant, so it stuck in spite of my protests. When Mimi rented her house for a film shoot the same week she had to travel to New Mexico to cast “real people,” she paid me to sit in her house and make sure the production crew didn’t stick knives through her leather club chairs.

I arrived for the week and found a hand-scribbled note detailing a bonus set of duties I was expected to perform. Not only did I have to oversee the traveling band of gypsies that filmed Sears’ commercials, but I also had to “clean up the dog shit in the backyard” and “keep an eye on Margie.” No such luck that Margie was just an unfortunately named cat. Instead I had to deal with her tenant from Baltimore. I was house-sitting a house that was already occupied. According to Mimi, I had to be there because Margie was oversexed and relentlessly making passes at her. Who knew what that type of person would do to the furniture if she had the house to herself? I was expecting a minx and in walked a prairie dog wearing a pink argyle sweater.

Having received a note from Mimi asking her to make sure I didn’t steal anything and list it on Ebay, Margie was equally wary of meeting me. We approached each other with the mutual and valid skepticism of two people wondering what kind of person would stay in a house owned by someone with the charm and hospitality of, well, a casting agent. I was paid to be there so that made me feel superior. Margie, on the other hand, had been tricked into moving in by two women whose friendship she was in the process of reevaluating. They had told her that Mimi would be both a great housemate and help introduce her to the lesbian community. Within the first 24 hours of her arrival, Margie was mauled by Mimi’s two feral Labradors and then forced to sit through a lecture about the necessity of a Prada wardrobe.

Margie had moved to L.A. with two suitcases. One was filled with a haul from Anthropology’s seasonal sale and the other contained her high school uniform. When she saw me standing in Mimi’s living room wearing old Levis, motorcycle boots and a t-shirt, she felt an instant connection to a person who had obviously not received the memo about power dressing. In addition, I had gone to Margie’s rival high school and immediately recognized Notre Dame’s colors hanging in her closet. With a common history and a current tolerance for Mimi’s abuse, we became fast friends. 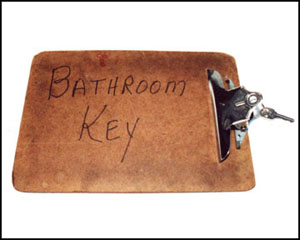 For five days, I hid in a back office while the production crew ran roughshod through Mimi’s house. Each evening Margie and I would relax with a bottle of Mimi’s wine. As we sat on the front porch of a house neither of us owned and drank wine that neither of us had bought, we discussed our hopes and dreams like two struggling people in their mid-thirties tend to do. We were young enough to believe we had run out of chances to make changes in our lives, and old enough to know everything was our own fault. I spoke about my photography and Margie talked about her long unrealized dream of traveling across the country to document restroom keychains. She truly believed every block of wood, old spatula, and tin cup that stopped weary travelers from stealing a coveted bathroom key captured the unique and unsung character of America. Just like when I told her she looked great in her school-issued tunic, she also believed me when I told her I thought her “idea” was fascinating.

Maybe it was the wine. Maybe when I told her in the past, my photographs focused on the banal, she thought I said, “baño.” Maybe it was the strength of our mutual desperation. Whatever the reason, it appeared Margie was convinced we could work together to create a coffee table book about our nation’s locked bathrooms. In the tradition of John Steinbeck, Robert Frank, and the Donner Party, Margie suggested we take a road trip.

I had no desire to photograph keychains, but I knew the day would come when I would totally have to give up on artistic integrity. It seemed fitting that the proposal was centered around toilets.

It was very easy to sit around drinking wine and declare that I was prepared to drop everything to take a trip around the country. It was another thing entirely to go home and announce to Lisa that I was leaving for thirty days with another woman. Lisa is equal parts Italian and Irish. I’m half Scottish, and half English. Genetics dictate that she is opinionated, confrontational and believes life-decisions are based on a “fear of death.” On the other hand, I’m predisposed to sunburns, hard drinking and emotional avoidance. Our mixed ancestry fosters a relationship based on her brutal honesty and my fear of conflict.

“Wouldn’t you like to see me make a change in my life?” I presented the plan with a strong teaser, and mumbled my way through the specifics. Lisa was familiar with that trick; her ears were conditioned to tap into the low frequency of my mutters. I fully expected her to respond to my request the way she always did when something happened she did not approve of and declare that I was “bringing shame into our household!” Instead, she quickly and enthusiastically agreed I needed to go away.

A. I was sure she meant get away. B. It wouldn’t have killed her to pretend my absence would be hard on her.

The only hurdle stopping Lisa from shoving me out the door that very moment was the financial feasibility of the trip. Margie had agreed to put all of our lodging, gas, and food on her credit card if I could pony up my half of the charges when we returned home. Lisa and I estimated $1000 would cover my part of the bill. We had $67. It didn’t seem likely spending 30 days in a car was going to do anything to increase our capital, but if we dipped into savings, called in some favors and emptied our change jars, we could come up with an additional $5.80. The fact that Lisa and I were able to come together and agree $72 was plenty of money to send me across country was a testament to our desperation, audacity and insanity.

As one way to cut down on costs, Margie suggested halfway through the trip we stop in New York and pick up Sylvia. Born in 1973, Sylvia was a 21-foot Airstream trailer Margie had used as a guesthouse at her upstate residence. Apparently the new property owners didn’t see her as a charming fifth bedroom awaiting a sewage hook-up. They didn’t care that three years ago, Fortune Magazine did a feature on Margie and Sylvia documenting Internet whiz kids and their spoils of the cyber boom where Margie was prophetically quoted as saying, “If everything falls apart, I can always live in my trailer.” It wasn’t important to anyone in the house that it did, and we were going to. The history and relationships of the previous tenants were of no importance to them. They just wanted the twenty-plus feet of metal removed from their field before it killed the grass.

It was becoming increasingly awkward and hard to hide the fact I didn’t have money to buy film. The only preparation I could afford was to design and build a traveling photography backdrop for the back of Margie’s Land Cruiser that would enable us to photograph every keychain on a white background. The contraption consisted of an old roll of seamless white paper I found in the garage, a broom handle, and a generous application of duct tape. What the studio lacked in engineering and practicality, I made up for with adhesive. When Margie looked into the back of her car, she did not see a splintered rod affixed to her windows with two tennis ball sized wads of tape sure to leave a residue that would outlive the car’s lifespan… She saw, for the first time, her dream – about to become a reality. Margie was so enthralled she offered to put all of my film on the trip’s expense account.