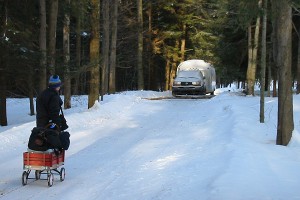 It had been two years since Sylvia had moved from the field in Callicoon. She was in desperate need of grooming and maintenance so on our way into New York City, we dropped her off at the Airstream sales and preservation facility.

Frayed brake wires, bee hive in the vent system, noxious fumes coming from the heating system; Margie’s checklist for repairs read like the “probable cause” section of an accident report. It took three service men over an hour just to transcribe the estimate. Bored out of our minds, Margie and I toured the new line of Airstream trailers. Suddenly “classic” didn’t seem so charming. New wood floors compared to thirty-year old carpet mites. Working shower versus a detached spray nozzle lying on top of a drain.  An eight speaker stereo system instead of the old AM cassette player. The new models were slick and seductive, but Margie stayed loyal to her first true love. “Sylvia’s cabinet doors are real wood not laminate… They don’t make this style of drapes anymore…Have you ever felt the high from a propane leak in a small confined area?” To be honest, the only high I wanted to feel was the one connected with an extravagant purchase that was way out of my price range. 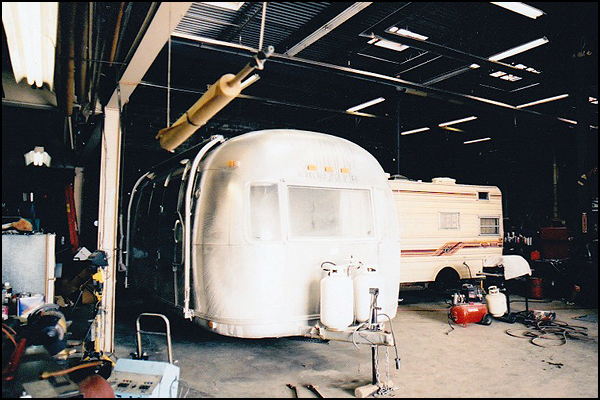 It was going to take three days to clean and repair Sylvia. During that time, we decided to stay at Margie’s West Village apartment that she sublet to her ex brother-in-law. We headed into New York and were lucky that all the traffic seemed to be going the opposite direction. When we arrived at Margie’s building, we found parking steps away from the front door. Occasionally, someone would rush past us with an armload of plastic sheets and duct tape, but other than that, the sidewalks and streets were pleasantly calm. We actually thought we were lucky to find the city so quiet. It wasn’t until a friend called from Maine with the warning, “If the shit goes down, don’t show up on my doorstep, glowing in the dark covered with small pox,” that we realized something was wrong.

For two weeks we have gathered all our news from un-purchased newspapers stacked inside dispensers. Aside from headlines and anything printed above the fold, we had little exposure to current events. We knew that our country was rapidly heading towards a war with Iraq, but the details were murky. In fact, the particulars of anything not related to food, gas, or toilets failed to hold our attention. The code red terror alert in New York City had completely escaped our notice.

We had two choices. One, follow the government’s advice and seal all windows, doors, and vents with plastic and tape. Or two, go outside and risk an agonizing death by a terrorist introduced gas. The first seemed a whole lot like the way Margie and I had spent the last two weeks. Number two could result in a horrible gruesome demise, but appeared to be the least painful of the options. We made reservations at an Italian restaurant.

The government predicted decimation of Manhattan turned out to be the perfect night for dining out in the city. A group of five of us had no trouble finding a quiet table by a window. It was like going to a bar on Christmas night – crowds were thin and the servers, those without family or friends to run to, were grateful for the human interaction. Without the usual ambient noise it was easy to talk and, as polite people often do when dining with out-of-town guests, Margie’s friend’s inquired about the nature of our trip.

Margie responded with tales about the unified soul of our country and honoring the craft of the people we had met. I talked nonsensically about a 4×5 view camera that I never used and told a story about my fitting my dog with goggles that made me sound like a serial pet abuser. Margie presented ethereal Americana. I might as well have pulled a potato bug out of my pocket. When we stopped speaking everyone sat in silence until finally someone asked, “But, why are you doing this.”

Without shtick or jargon, I didn’t really know how to answer.  I knew it wasn’t keychains I was chasing. There was something more that I was after, but I didn’t know how to turn that into an amusing mealtime antidote. So, I simply changed the subject.