When Margie talked about Sylvia, her voice became a gooey mess of nostalgia, fetish, and wanderlust that sounded almost pornographic. I had a hard time understanding how something so rotund and weathered could be the source of so much longing. Margie waxed about the trailer’s pull, magnetism, and inviting plush interior and I assumed she was referring to the hitch, cold metal siding, and some part of the trailer I wasn’t sure existed. I didn’t understand that she was trying to prepare me for the entrancing effect the mere sight Sylvia had on, seemingly, normal people.

We pulled into the parking lot of Margie’s sister’s office for a quick goodbye. I was beginning to learn that nothing associated with Sylvia was quick. What should have been a moment filled with short hugs and awkward jokes about roadside toilets, turned into a stampede of office workers running outside to check out our trailer. I guess if you hadn’t committed yourself to residing inside her, life with Sylvia would seem romantic and liberating. Tiny cabinets filled with canned soup, three foot benches that doubled as our beds, the tiny porthole windows. Every convenience was greeted with squeals and nods of approval from the group. I watched them crinkle their noses at the musty smell of freedom that permeated the sleeping quarters, and I had to admit, “People are drawn to the trailer,  . . . like flies to shit.”

Our departure incited the kind of nostalgic and overly sentimental hand gesture utilized by extras standing on the dock of “The Love Boat.” It was a combination of dreamy envy mixed with the understanding that the cruise director was a nightmare. It was impossible not to feel even a little bit special with a gathering like that launching our goodbye. I hooked my arm outside the open window and waved back. Margie accelerated out of the parking lot. For thirty beautiful feet, we were kings of the road. Then the trailer door that we forgot to lock swung open with such a force that it broke the plexi-glass cover of the screen door. Our glorious send-off ended with the crowd averting their collective eyes and shuffling back to the safety of their offices while Margie and I collected the broken parts of the door off the ground.

After Baltimore, we headed towards the Eastern Shore of Maryland. Throughout the trip, every time we experienced a drought of keychains, we talked about the Chesapeake Bay as the region where our fortunes would change. Small communities of fishermen and farmers mingling with summer tourists on secondary roads seemed like a breeding ground for kitsch and locked restrooms. There was no empirical evidence to back our claim. Neither one of us had ever touched a keychain in the area. But, that didn’t silence our chorus, “It will be better when we hit Easton.” 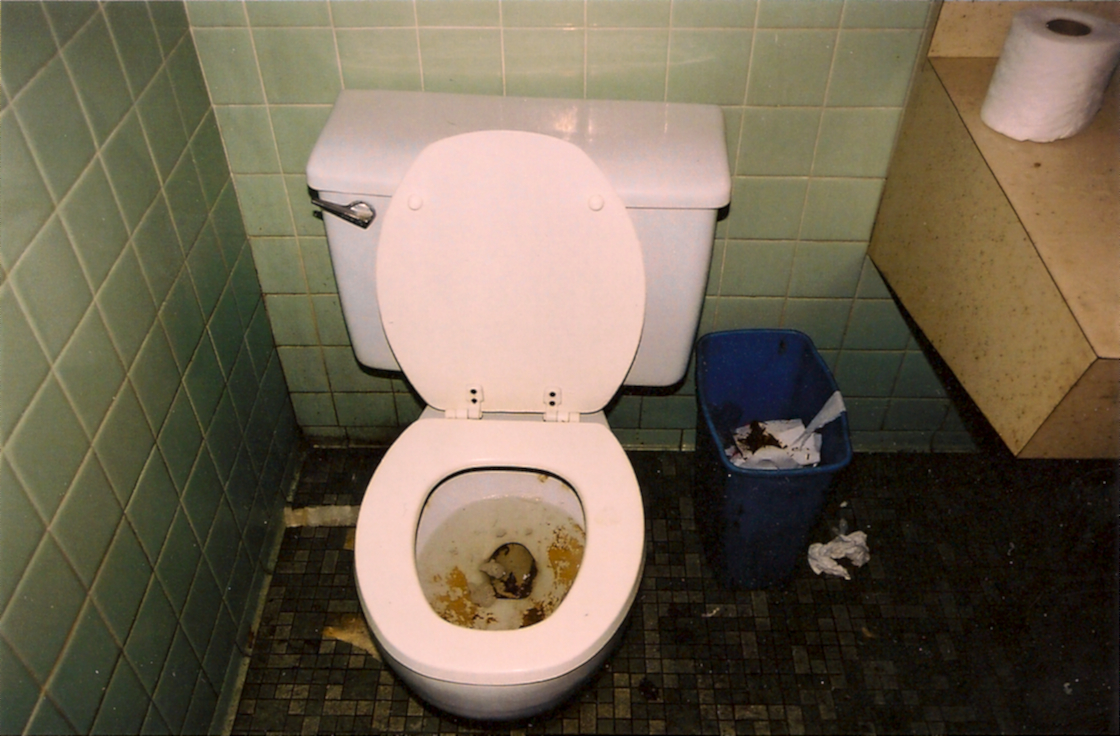 Of course, in February, there was no tourism or seasonal workers. Bathrooms were keyless and hadn’t appeared to been cleaned since the Christmas rush. But that wasn’t our problem. The issue was, we’d never considered what it’d be like to drive with Sylvia. During the first leg of the trip, it had been easy to spot a possible target and either quickly pull over or turn around to investigate. Now, with the added weight and mass of the trailer, a quick stop became anything that didn’t produce a 100-yard skid mark; and nimble u-turns were completely out of the question. On top of that, the large amount of poultry farms in the area created a disturbing by-product. The road was littered with the white-feathered corpses of dead chickens. It was unclear if they were escapees from the many flatbed transport trucks loaded with cages, or casualties of attempted road crossings. But, it was an unsettling sight and not the type of thing we wanted stuck in the tires of our living quarters.

Our new criteria for stopping was narrowed to clean stations visible from 200 yards down the road, near a turn lane, and free of dead poultry. Our options were narrowed significantly. After one keychain photograph, we decided to stop in Virginia Beach for the night.

We were no longer “motel people.” Margie and I had become “trailer people.” It was a lateral change at best, but I was ready for something new. With our new lifestyle came the fact that we needed to stop traveling earlier in the day. Gone were the days when we could pull up to an establishment, pay for the hours we were there, triple bolt ourselves in a room and fall asleep. Our new ritual would require sewage hook -ups, hose adapters, and weight-stabilizers done best when assembled in daylight.

I had never camped in a trailer and looked towards Margie to guide my expectations. I was hoping for a sentence filled with adjectives like fun, secure, and quiet. Instead I got, “You have not known fear until you’ve spent the night in a campground during the offseason.”

We had been in a car accident, used every public restroom from California to New York, arrived in Manhattan during a code red terror alert, and, as Margie saw it, we were only now entering the scary part of the journey. I was beginning to suspect that I had been misled in regards to the safety factor of the trip.

When we arrived in Virginia Beach, the campground was practically full. Unlike most of the other occupants, Margie and I did not have a large satellite dish, a patch of artificial grass, or any plastic lawn ornaments to unpack and scatter around our site. We assembled the appropriate hoses, cranked the necessary lifts, and in less than five minutes, we had locked ourselves inside the Sylvia. Canned soup, Pillsbury crescent rolls, and red wine – if it had been up to me that would have been the entirety of our evening. But Margie couldn’t sleep in the same space with our half-filled sack of garbage, so we had to leave the security of the trailer in search of a trash bin.

After one loop around the lot, we were unable to find any sort of dump area. Eventually, we ran into a woman who, because she looked just like Mrs. Roper from Three’s company, we assumed would be helpful. Two strangers with a sack of rubbish slowly patrolling your campsite would set off some sort of internal alarm in most people. But this woman took it all in stride. After an extended puff on her cigarette she rattled the ice in her drink, and answered our question with a lengthy discourse on the state of trash in the campground that ended with, “just leave it outside your trailer and, if the birds don’t get it, the caretaker will pick it up first thing in the morning hon.”

She wasn’t talking about cute musical creatures. The birds she was referring to worked at night and, judging from the pile around our feet, were big enough to eat liquor bottles and cigarette cartons.  I was fixated on the women’s ability to expel smoke from her mouth even when she was inhaling. If that wasn’t enough to give me nightmares, my sleep would be contending with images of huge trash-eating nocturnal birds. I began to miss the days when claustrophobia and carbon dioxide poisoning were my only worries about living in a trailer.