It started with a barely muffled cough, then a click-beep-screech of the dial-up connection on the computer; finally I heard ice rattling as she organized the contents of the cooler. It was 6:00 AM and Margie was trying every trick to wake me without actually rattling my body. I heard her, but I wasn’t going to give her the satisfaction of thinking that slamming a folded shirt onto the bed was enough to get me up at that hour. It was a battle of wills and I was going fake sleep my way to victory. The problem was, I completely misjudged how annoying I found Margie’s need to fold everything. When I finally opened my eyes, she acted surprised that ripping warm sheets off my body would make me sit straight upright. We made eye contact and she chirped  “Chop, Chop. We need to get on the road so we can miss the traffic.”

It was Saturday with nearly whiteout conditions outside. No sane person was going to be on the road, but Margie didn’t want to hear that. The only way I could get her to ease up was to promise that if she got in the shower, I would get out of bed to finish folding, packing, and cleaning the rest of the room. Margie mentally assessed my ability to pack a suitcase for an uncomfortably long period of time. It was still dark outside and I was in pajamas pleading that I was qualified to clean a motel room. I don’t think Margie ever believed that I was capable. She just had no choice but to trust that a thirty-two year old woman could pack a suitcase. The minute I heard the shower start, I dropped the shirt I was pretending to fold, climbed onto Margie’s fresh made bed, and watched the news. When the shower stopped, I loudly zipped and unzipped the suitcases so – from the bathroom – it would sound like I was working hard.

When I got out of the shower, the room was empty and Margie was sitting in the car, waiting to leave. Blowing snow, low lying clouds, ice covered roads, frozen plains created a perfect curtain of white. It was nearly impossible to distinguish between the roads, land, and sky.  We were traveling into the heart of coldness on a weekend morning.  The pre-dawn Saturday storm congestion that we were rushing to avoid was non-existent. 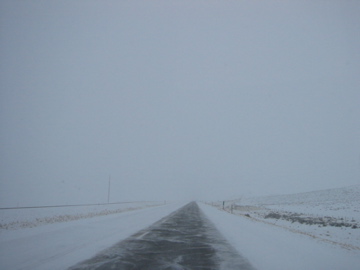 The sub-freezing temperatures and constant drizzle of snow/ice downgraded my interest in the project from a dim curiosity to pure dread.  If I could take the pictures without moving from the warmth and comfort of the passenger seat, I might have felt differently.  While I had never exactly sprung into action at the sight of Margie emerging from a station with a key chain, I started to do everything in my power to stall the process.  I would sit in the car and watch Margie inside the station coaxing the keychain from the attendant.  When she emerged victorious, I would wait until she was standing outside the car, turn on the engine, roll down my window just enough to expose my lips, and ask, “How did it go.”  Initially Margie answered with all the details.  Then, after a morning of that routine, she began to just scream, “Get out of the car.  And don’t think I can’t read your lips when you start swearing at the sight of a key chain.”

We drove in complete silence; the only noise was the methodic brush of windshield wipers broken occasionally by the snap of Margie taking a bite of licorice.  She was too deeply engrossed in her calendar to make any conversation.  There were no curves, turn-offs or other cars on the road.  I didn’t have to concentrate on what was ahead of me, so I read her datebook over her shoulder.  She was making her schedule for New York.  Her tax accountant, her doctor, and her dentist – all the appointments were set for February 12.  It took us two days to cross Utah.  It seemed unlikely that we would be able to cross six states and pick-up the Airstream trailer in three days… unless we traveled on the interstates and stopped taking pictures. I had justified my lack of interest in the project by telling myself that Margie’s enthusiasm more than compensated for the both of us. But now she was giving up on the project in favor of getting her taxes done, three months before they were due. Face with its demise, I suddenly needed the project like I had never needed anything in my life. The one chance I had to fix all my problems depended on capturing every disgusting keychain between California and New York.

I could have talked to Margie about my expectations and disappointments.  Instead, I called her obsessive.  She called me spoiled.  For our first fight, we stuck to the obvious.

I made arguments based around such strong points as “But, when I make plans, everyone expects me to break them.”  She refused to push her appointments back a couple of days because she had “to get things done.” We both picked the most annoying defenses ever. As the fight escalated, I started to feel an odd sense of relief. The project was going to end and it wasn’t going to be my fault. I could return to the warmth and comfort of Southern California and blame the failure on Margie’s inability to break free from a schedule instead of my inability to finish a project. I wouldn’t have a sense of accomplishment, I would have a scapegoat – and that could be just as fulfilling. I saw an opportunity to end it, guilt-free, “Let’s just get to New York, and stop.”

For the second time that day I had completely miscalculated the power of Margie’s personality. I had turned our project into another chore that she had to finish. She agreed to reschedule her appointments. She would have her teeth cleaned, check her cholesterol, file her taxes, and still photograph keychains across the United States. I should have never doubted Margie’s ability to over extend herself – that was a given. The question was could she relax enough to spend thirty more days rambling through the country on back roads? More importantly could I motivate myself to keep working and be there with her? Were we just going to grow to hate outdoor restrooms, filthy key chains, and each other?

We spent thirty minutes fighting and the rest of the day recovering, being overly courteous and mindful of each other.  I started to get out of the car before asked and was extra careful to spit all the sunflower seeds into a single cup. For her part, Margie let us stop early and actually found a hotel, complete with a restaurant, bar, swimming pool and gym.  We went out to dinner, drank martinis, and when it came time to order – even though there was a special $5 off if I agreed to grill my own meat on the outdoor fire pit – Margie generously suggested that I take it easy and order my food cooked. We wouldn’t be able to sustain that level of courtesy for too long, but it worked for the night.