After I lost her pillow, Margie had become a grudge-holder. It wasn’t my favorite side of her, but it was a refreshing change from the obsessive go-getter that I was becoming way too familiar with. For my part, I was developing a new found appreciation for the little things that I had once taken for granted. Sleeping in a motel where I didn’t fear for my life, a pillow from home, and a complimentary continental breakfast in the motel lobby; those were now my keys to happiness. I had reached the point where the prospect of eating food that I didn’t find in the car was what got me out of bed in the morning.

Margie and I literally ran downstairs for our free meal. When we arrived in the lobby, it was empty expect for a homeless man dressed in a Sgt. Pepper style military uniform nibbling half a sponge muffin off the tips of his fingers. The other half of the pastry was all that was left on the buffet table. Under normal conditions, staring down a man whose clothes and hygiene suggested that he didn’t abide by the norms of society would have seemed like a bad idea.  But I wasn’t in my regular state of mind.  Cold weather, down pillows, Illinois – I thought I was equipped to handle all those things.  No.  I was in the lobby of a Motel Six about to attack a senior citizen. It was time to get back on the road.

Two Angelinos traveling the country documenting restroom key chains weren’t exactly the sugar plum dreams that danced through heads of tourism councils, but we had found ourselves in an area that seemed tailor-made for us. People weighed down the keys to their facilities with clipboards and super-sized travel mugs. Fresh rolls of toilet paper were handed out like campaign buttons. Northeastern Illinois respected it’s shit. One four-way intersection in Plainville and we had hit our quota of photos for the day. Margie and I mutually agreed to stop working and hit the freeway. We both wanted to make it to Granville, OH – the home of my alma mater, Denison University – in time for happy hour.

Near the border of Ohio, we cut down to smaller roads to find at least one keychain to represent the state of Indiana. Southeast of Indianapolis is a series of small towns unaffected and unburdened by modern life. Fifteen years ago, when I went to school in the region, the people who lived in the area hated my type. Since then, I had done nothing to make myself more appealing. Our reception by the town’s folk fluctuated between open hostility and anger.

At our first stop, as soon as I pulled out my camera, one of the employees pulled his truck around to block my camera angle. Unlike earlier stops, there was no warmth when Margie described the scope of our project. The owner of the station just growled that he did not want to be the subject of a New York Times article. I wasn’t sure how he made the leap from niche art project to national publication, but, if that was truly his fear, I was left with two conclusions:  1. The premise of our book was so preposterous that it came across as an elaborate ruse to trick hostile townies into exposing their toilets. 2. He obviously had something to hide – no innocent person worries about an exposé in a national magazine.

It all added up to a bad situation. We weren’t writing a Grisham novel – if we had stumbled upon nefarious goings-on, I wanted to be out of there as soon as possible. We jumped in our car and moved a hundred yards down the street.  For some reason, two large men standing on the curb, staring at our car seemed like an inviting prospect.  Under normal conditions, I would have locked the car doors and kept on driving, but, clearly, I’d given up on normalcy when I agreed to do this trip.

The men invited us inside to take notes and pictures of their bear collection. I actually prayed that they were hunters. We had reached the point in our travels where encountering a space full of slaughtered animal hides seemed like the best-case scenario. 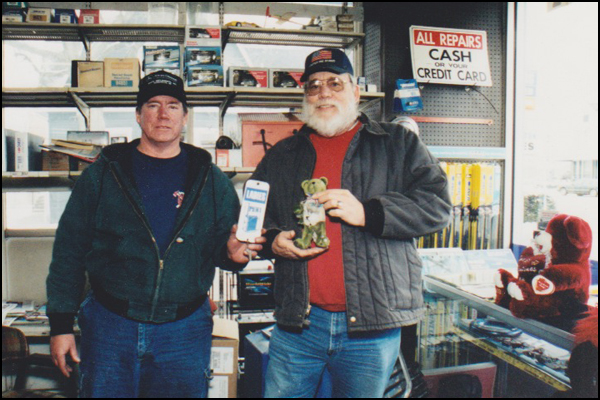 Their office was filled with toy bears, many gutted; their bellies split open and the filling removed. The two men made the pelts dance and sing surprisingly upbeat jingles in high-pitched voices. When the show was done, they offered to take us on a tour of the men’s bathroom. We asked to see the women’s, but that was outside, where “it’s cleaner.” Evidently, we weren’t allowed to enter the hygienic parts of the shop. We had progressed into the horror chapter of the story. I was scared. I always was. But even Margie was slowly backing her way towards the car.  We managed to thank the men, put our equipment away and reverse out of town without breaking eye contact with our hosts.

We finally headed into Granville at dusk, dropped off our bags with a friend of Margie’s that lived in town, and went directly to the bar. I was finally in a place where I felt at home.  I didn’t actually know any of the people that surrounded us, but I knew the Denison types: the preppy frat boys on one end, the preppy party girls on the other, and me, the creepy alumna trying to relive her glory days, in the middle. Just like I would have when I was their age; the students avoided the two old ladies at the bar.  We weren’t buying anyone drinks, going to sleep with anyone, or driving anyone home; we were just space-eaters in a pizzeria that catered to twenty year-olds.

Eventually, the bar became more and more crowded making it harder and harder for everyone to maintain the circle of solitude that had formed around Margie and me. Finally someone talked to us. Two boys asked what sorority I had belonged to. It had been over twenty years since I had defined myself by Greek letters. A question that would have annoyed me every other day of my life, made me proudly giggle and announce that I was, still am, a Kappa Alpha Theta.  The girls who heard this smiled with solidarity and the boys smirked like they expected to find me later, passed out in their bed.  I felt inexplicably cool. Margie, on the other hand, was explicably uninterested. Every sentence that contained, “and once I…”, “we used to…” or “I got so drunk that…” was met with the glazed stare of complete boredom.  She had no desire to relive a higher educational experience that, in the retelling, sounded like four years of booze-addled summer camp.

I feared that Margie was going to leave when I stumbled on a Denison tradition she could get behind – stream of conscious drinking. There was no coherent structure or logic to the drink choices. We just ordered whatever happened to pop into our heads.  It was a recipe for a university-sized hangover, but we had nothing to do the next day but sit in a car and look for locked toilets. More than any story I told, or building I could show her, I showed Margie a glimpse of my old college days…I drank way too much and didn’t have any money to pay the bill.