We were in New York waiting for the Airstream to be fixed, we hadn’t photographed a restroom keychain in two days. Our momentum was started to fade. Margie and I sat in her apartment, drinking coffee, trying to figure out what to do all day when a UPS package arrived at the door.

Packages in the mail are always fun to receive. They could be ticking, covered in an unidentifiable white powder, or just sent from a girlfriend that wants nothing to do with you; there’s that moment when your brain sends the message, “oohhh, somebody sent me a present.” Then the reality sets in, “what did they send me?”

I was very curious to find out what Lisa had spent our last dollars on. Yesterday I had found out that we had no money. I was aware that we were poor, but to be broke was another matter altogether. It was the difference between discovering an engorged tick on your neck and finding out you have Lyme’s disease – one was an embarrassing situation to have in public and the other had serious life implications.

I wished I had waited to open the box until Margie was gone and I was alone. It was hard to hide my anger and anxiety as I inspected the contents. Margie had no idea about my financial situation, the fight Lisa and I had over it, or the great anguish the ‘gift’ had triggered. I had to pretend that it was the physical labor required of self-pleasuring that made me shake with rage.

It was too late to be honest with Margie. Two months ago, I promised her that I had the money to take the trip. I seriously doubted that she would have listened kindly had I told her that I couldn’t cover the cost of a burrito, much less a tour around the United States. The closest I had come to describing my predicament was the previous night after Margie bought me my third martini when I lamented, “my career is not where I expected it to be.”

“I think sitting in a car all day long, eating fried food and sunflower seeds is making me fat,” would have been a less obvious statement. But, she pretended to be surprised and was sympathetic. Needing more out of a job was something Margie could understand – fiscal irresponsibility was not. She believed in balanced books and financial planning. Even after she had taken a hit when the internet bubble burst, Margie held on to investments in a couple of companies that guaranteed her security for life. Her response if she found out that I was going to default on the on my half of the expenses, would have been to cancel the trip and terminate the rest of the project.

Margie didn’t want to sit around all day discussing my ire towards Valentine’s presents, so she suggested we attend the anti-war rally in front of the United Nations building. I liked that idea, protesting the U.S. government on the streets of New York might just restore the sense of control that I was lacking in my life. 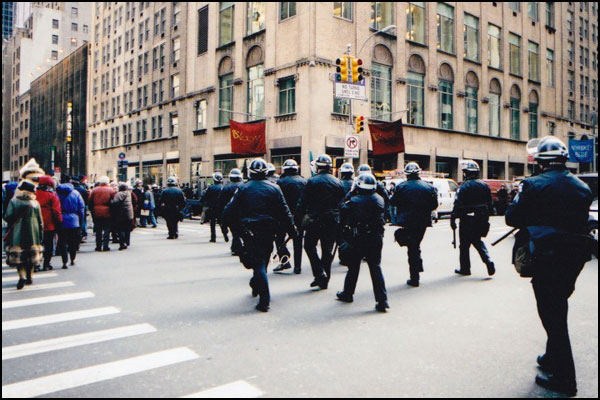 We barely made it three blocks out of Grand Central before we were stopped. The crowd had grown to such a size that all the streets running east to west were completely jammed. Police closed the avenues that ran North and South.  Vans filled with riot units and prison buses sat at every cross section. For the first time since we began our trip, I felt hopeful that there wouldn’t be a war. Surely, the government wouldn’t do something that so many Americans oppose.

The rally was scheduled to end at 1:00. At 1:01 the riot police, side to side, club to club pushed their way into the crowd. By 1:30, we heard the news that, as we stood outside collectively willing a change, the President had ordered more equipment and troops to the Middle East.