“Stop it! Stop it right now!” Margie was standing in the window, banging on the glass, making such a clatter. I sprang from my bed to see what was the matter and I realized that she was actually instructing the snow to stop landing on her car.

Margie washed her car every other day and the snow was falling to the tune of six inches an hour – the odds of some flakes hitting the pristine vehicle were pretty damn high. Screaming like a grumpy old man watching neighborhood children playing on the sidewalk wasn’t going to make a bit of difference. 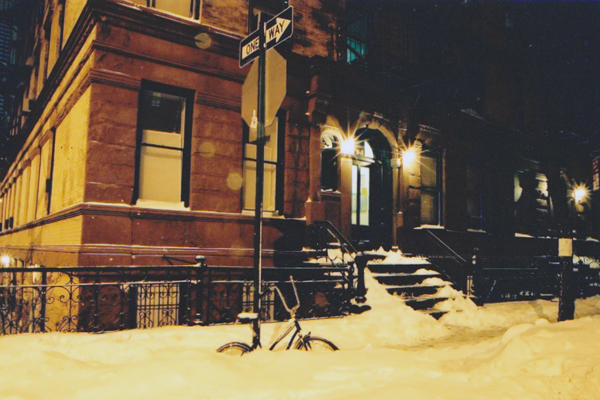 The real issue wasn’t ice or salt corrosion; it was that we were stuck for another “dang” day. Even if we could have dug out the car, the roads in and out of the city were closed. Our only choice was to do what every other sane person in New York was doing.  Tomorrow, the snow would melt, slush would form, traffic would jam, icicles would drop, and we’d all have to start moving once again. But that night, we put on heavy coats, gave ourselves over to the beauty of the moment, and headed to a local bar.

Last night we’d left the fireplace flue open. Gusting winds had pushed the contents of the chimney into the apartment. A thick layer of ash covered the entire room and, no doubt, a large percentage of my lungs. I thought when the trip finally did me in; it would be a relatively quick death – a car accident, frostbite, or crime of passion – no such luck. Lisa wouldn’t be flying to a cold northern state to identify my frozen body found along the side of the road. She would sit with me in a community hospital while I coughed up my blackened lung. I came to New York healthy. I was leaving with the life expectancy of a coal miner.

On the other hand, Margie didn’t look like she was going to make it past breakfast. She didn’t have the constitution to tolerate the amount of dirt currently stuffed in the apartment. The only spot of color in the gray soot was the brownish green of Margie’s eyes as they darted back and forth, surveying the damage. When she reached to pick up the phone, her hand left an imprint on every surface it touched. “Speed-dial” “1” the two buttons gleamed after her fingers wiped them clean. She called the carpet cleaning service and made an appointment for 7:00 the next morning. 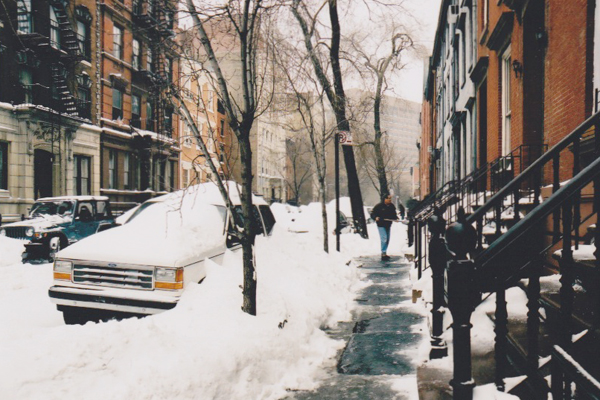 Unfortunately, she did not have a plow service programmed into her machine. The city plow trucks cleaned the roads at the sacrifice of anything parked on the street. All the snow had to go somewhere – it was on top of and around Margie’s car. This may actually be a blessing as it is hiding the salt and dirt that resided underneath. I seriously thought Margie’s head would explode if she had to touch another dirty object. Thankfully, Margie had four-wheel drive and eventually we were able to push our way out of the parking spot and were on the road before noon.

Initially, we had planned to head up to North towards Maine. But, since we had delayed our trip in favor of spending three days going through Margie’s finances, we had gotten behind the storm. Road closures and delays would extend the trip indefinitely if we followed that course. Instead we decided to move east and go to Shelter Island where, over forty years ago, Steinbeck started his Travels with Charley. 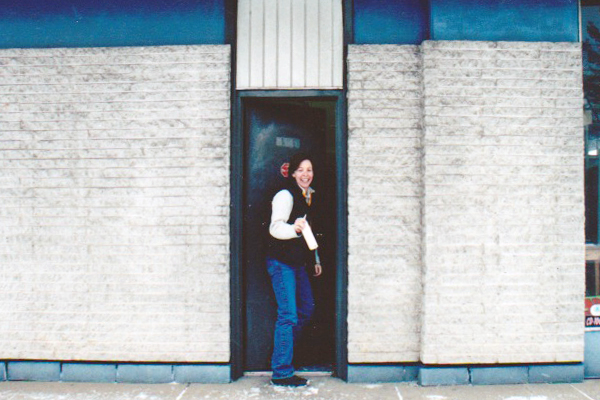 Immediately off the Long Island Expressway was the first convenient restroom between Manhattan and the Hamptons.  It was very easy to find; you could almost see the fumes from the street. The key, attached to a folded piece of cardboard, was left in the keyhole on the doorknob of a disgustingly pungent and smeared toilet. Three gas stations later Margie exited a restroom ghost white, complaining, “Shit…shit…there was human shit all over the bathroom.”

I remembered back in Ohio when I had to explain to her that if she found excrement in a bathroom, most likely it came from a human. As recent as yesterday, I had never heard Margie swear. As we neared the opposite coast from the inception of our travels, Margie had developed the language and world-weariness of a truck driver.

It was late afternoon when we boarded the ferry to transport us to Shelter Island. The Long Island Sound was a pool of ice floats. You didn’t need to shout “King of the World” in my ear in order for me to understand the danger of a boat in icy waters. Miraculously, we made it across. In return for our death-defying crossing, our reward was an STP oil canister keychain at the local filling station. Margie, picked it up like she was holding a prize fish, “Isn’t it fuckin’ beautiful?”

It was.  We had hit the far East Coast and were officially headed home.